On 15 October 2012 we left with the first lineup of SourceLair for San Francisco to raise money, in order to turn our ambitious side-project into a well-funded prominent startup company.

To make this trip happen we used the €10,000 that we had received at that time as a prize in an entrepreneurship competition in Athens. We booked our tickets, a 5-people room in a motel in Redwood City and a car to move around Silicon Valley freely. The next step was to speak with every entrepreneur and developer we knew in order to connect us with investors in Silicon Valley to pitch our product(s) at them – suprisingly we managed to book a few meetings with some of the best Venture Capital firms of the Bay area.

So we, a team consisting of five 2nd-year students working on SourceLair as a side-project, flew to SFO on October 15 2012 to stay there for 20 days and raise $1MM seed funding and then get back to Athens happy to execute its business plan. Yes, that was the exact plan.

We were driving from Redwood City to San Francisco, Palo Alto, Menlo Park, Mountain View and Sunnyvale to meet VCs and angel investors to persuade them to invest in our project in order to turn it into a company. We got rejected by all of them and it was more or less for the same reasons; we were unreliable, not focused, too young, too many co-founders etc. And rejection always happened with the almost same politically-correct way; “Hey it’s so interesting, but we invest only in companies that make more than 2MM annual revenue, sorry!” or “Yeah! Go find a leading investor yourselves and I will make sure to join you!”.

I am really happy that we did this at that particular time, because we did everthing by ourselves, starting from Athens. We didn’t have one of those advisors that make all the leads for you. We didn’t have any prominent university to make the connections for us. We didn’t spend our parents’ money on this. We were just crazy about what we were doing, let a lot of people know about it and they helped us. We were just 21 years old. 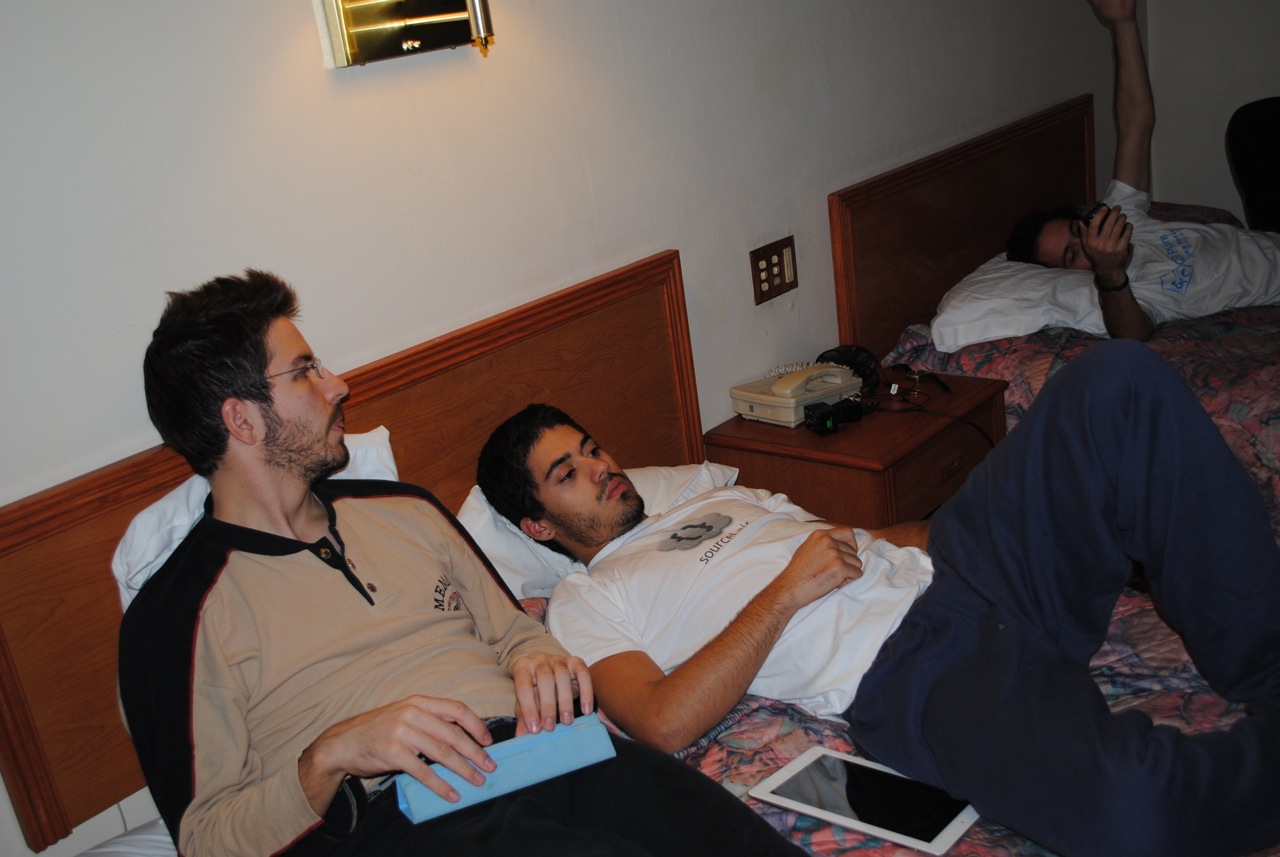 Thanasis, me and Marios chilling at the motel, after a (most probably) exhausting day

Epilogue: Now, exactly 3 years later, three of us are pursuing SourceLair as a funded startup company in Athens, while the other two of us are pursuing really ambitious Phds and academic carreers. I am really happy that all five of us grew up together, became better persons and are still close friends, talk about those memories and share great time together.

P.S. I always wanted to (re)start blogging and was just procrastinating on it. This post really motivated me to do so. Thanks Antonis Kalipetis.